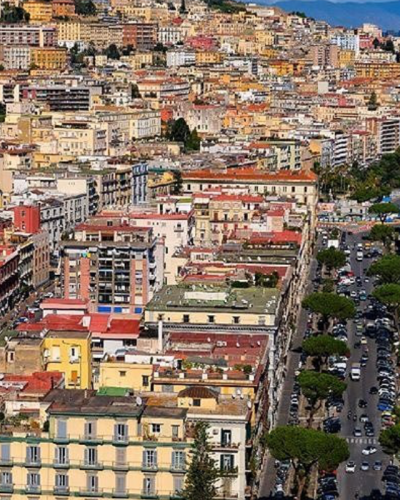 Walking Tour of Naples from the Port

Arriving to the Port of Naples there are so many amazing options for how you can spend the day during your shore excursion. Of course, many people will head toward Pompeii or the Amalfi Coast with private or group transportation, but walking tours of the lively city of Naples have become very popular in recent years as well, and with good reason!

About Naples and What to See

With almost one million inhabitants in the city of Naples itself, and over three million in the greater province, Naples is the third largest city in Italy and one of the most densely populated places in Italy. It is also one of the oldest cities in Europe, with an incredible past and present. It has ancient Greek and Roman roots, boasts one of the oldest universities in Italy, and was the capital of Italy more than once. This fascinating city could keep you busy for days and even weeks of sightseeing and adventure, so if you have just one day to explore we highly recommend arranging for at least a half day walking tour with a knowledge guide who will bring you up to speed and show you the best places in the shortest amount of time.

The Port of Naples is located right in the heart of Naples, so if you are arriving on a cruise ship your guide can come to meet you as you disembark and you can head out together on foot. Like any big city, it is important to pay attention to your surroundings, especially the mopeds and cars that zoom through the streets, and to be smart about watching your belongings.

A walking tour of Naples should start with a stop for a true Italian coffee and typical pastry called a sfogliatella, these crunchy and delicious delights can have various fillings such as nutella or cream. With breakfast out of the way, it is time to see the various churches and monuments that Naples offers. Of course with so much to see it will be impossible to visit everything in one day, so here are some brief descriptions of the various churches and sights so you can decide what is a must-see for you.

This church is a part of a monumental complex with many different facets. The construction began in 1310 and has undergone many changes over the years. During WWII the church was almost completely destroyed by an aerial bombing and was subsequently restored and reopened 10 years later. The complex is home to a museum with ancient relics and interesting nativity scene.

This church has a striking and unique dark façade with diamond studs jutting out, a rich history, and is located in the same square as the Spire of the Immaculate Virgin, an ornate monument built to protect Naples from the plague.

This is a street filled with endless shops brimming with traditional nativity scenes that Naples is famous for. Here you can purchase tiny little figures of Jesus in the manger, miniature working wells or fountains, mini fruits and vegetables and really anything you can imagine to use to create intricate nativity scenes.

This is the main cathedral of Naples and is dedicated to the patron saint of the city, San Gennaro (Januarius) and houses a vial of his blood said to liquefy on special dates and for special occasions.

Stroll along the Spaccanapoli street, an important road that divides Naples on what was once the ancient Greco-Roman road Decumano Inferior and see the main palaces and churches that line it.

This ornate and beautifully historic theater is the beating heart of the Naples arts scene. Featuring opera, theater, dance and concerts with its seating made for royalty and history going back to 1737.

One of four residences used by the Bourbon Kings of Naples, this immense palace is now a museum and tourist destination. Even if you don’t go inside, it is worth going to Piazza del Plebiscito square and looking at the impressive façade.

The most important shopping street in Naples, so if you are looking for nice Italian goods or some souvenirs to bring home this is the street for you.

The name translates to The Egg Castle, and it is a very striking fortified castle on the islet of Megaride that offers amazing views. According to the Naples city website, the name derives from a bizarre legend saying that the Latin poet Virgil hid an egg in the dungeons of the castle linking the fate of the castle to the fate of the egg for all time. If anything bad happens to the egg, disaster for the city of Naples will follow.

One of the best museums in the world for ancient roman artifacts with collections started by the King of Naples Charles III in 1734, it became a national museum in 1860. This museum is very large so be sure to read about it before hand so you know what areas and collections you want to focus on.

If you like adventure instead of museums and churches, why not join a guided tour of the fascinating subterranean tunnels below the city. The origins of the first tunnels are likely 5000-year-old tombs, but the underground area continued to be used over the centuries in various ways including as a Roman aqueduct system and as bomb shelters during WWII. People who do not like being in small spaces should not participate in this activity, as some spaces are quite tight. There are various tours offered throughout the city, our favorite is Napoli Sotteranea which  which offers tours in English every day and lasts approximately 2 hours.

How to greet Neapolitan style