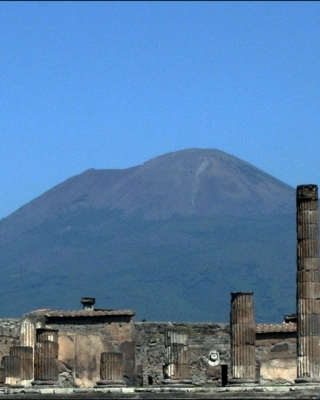 Can’t decide which archaeological site to visit?  How about both?!  And the Culprit!

At about 1pm on 24 October AD 79, Mount Vesuvius erupted violently. By the end of the following day, thousands of people were dead and the flourishing Roman cities of Pompeii and Herculaneum had disappeared beneath tons of ash, pumice and solidified mud.

The excavations at Pompeii and Herculaneum, by contrast, offer an intact vision of daily life in Roman society in all its aspects. They have produced not only many treasures, but also many less precious objects extremely useful for the understanding of everyday life during the years of the Roman empire. In the buildings of these towns - from the monumental to the most simple - the ancient world appears in all its complexity, with great clarity.

Mt. Vesuvius - Mainland Europe's only live volcano. Your driver will take you up 1000 metres, from there you have an optional 30-minute walk to the crater; Once at the top you can walk a third of the way around - inside the crater you may even observe a fumarole (steam/gas vents) - BUT most of all enjoy a spectacular view over the bay of Naples.

This tour itinerary can be altered to visiting two places at a more relaxed pace.

This is a physically difficult excursion involving a lot of walking, so good shoes must be worn!

FROM SALERNO PORT price of tour NOT per person

Transfers with pick up between 20:00 and 07:00 will have a night supplement of 15 euro added to final cost.
For Pick Up time, choose the closest time and then let us know in the notes the correct time.

Not sure? Send us your questions here